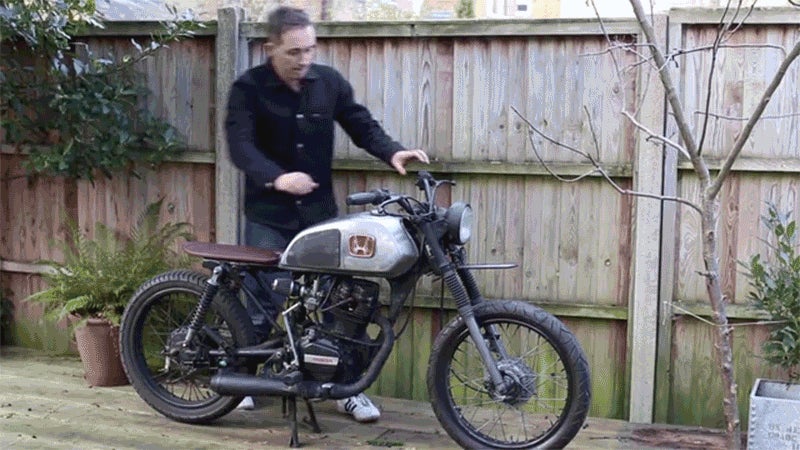 About ten minutes after the very first car alarm went off, the tech went from being a genuine theft deterrent to an annoyance that everyone just ignores. The makers of the Bike Mine have a better idea, at least when it comes to getting people to notice when a bike or motorcycle is being stolen: old-fashioned explosives.

Unlike an alarm system that can go off when someone just walks too close to a car, the Bike Mine works more like a booby trap. When a thief actually starts moving a motorcycle, bike, or what have you, it triggers an explosion generated by what’s known as a saluting blank—a shotgun shell without projectiles.

This approach helps reduce false positives, which is what have made car alarms so ineffective. You’re also probably more likely to peek out the window if you hear an explosion, rather than the wail of a siren. But is it safe? The Bike Mine’s 150-decibel blast will surely leave a thief’s ears ringing after it goes off, but as long as the blank shell doesn’t fire point-blank in their face, it shouldn’t cause any bodily harm.

The Bike Mine starter kit, which includes the easy-to-attach rigging, titanium tripwire, and three blank shells, can be pre-ordered with a $70 donation to its $21,000+ Kickstarter campaign. Delivery is expected sometime in September, so you might want to hold off on buying a fancy new ride until you know it will be safe and secure. If you’re a terrible person, there’s also a lot of prank potential here, but don’t ask us for any ideas.

Let Us Count Some Reasons Why You Won’t Want Will.i.am’s New Headphones

Will.i.am has a chequered history of making pieces of consumer technology that nobody really wants. Now you can add to that list a pair of Bluetooth headphones. Let us count some reasons why you probably won’t want these i.am+ EPs headphones in your life: They’re styled to look like vinyl records. Apple explains that there […]

Lasers and metal were part of 3D printing for decades before the machines became affordable for personal use. But researchers at Harvard are demonstrating a new technique by which 3D metal structures can be printed in midair, without the need for anything supporting them. If you’re not familiar with the process, 3D printers slowly build […]

Huawei sub-brand Honor, at an event in China on Wednesday, launched the Honor Magic 2. However, it was apparently not satisfied with just announcing a smartphone, and had several other announcements up its sleeve. It also launched a trio of other devices, including a tablet, a smartwatch, and a pair of earbuds. The Honor Watch […]