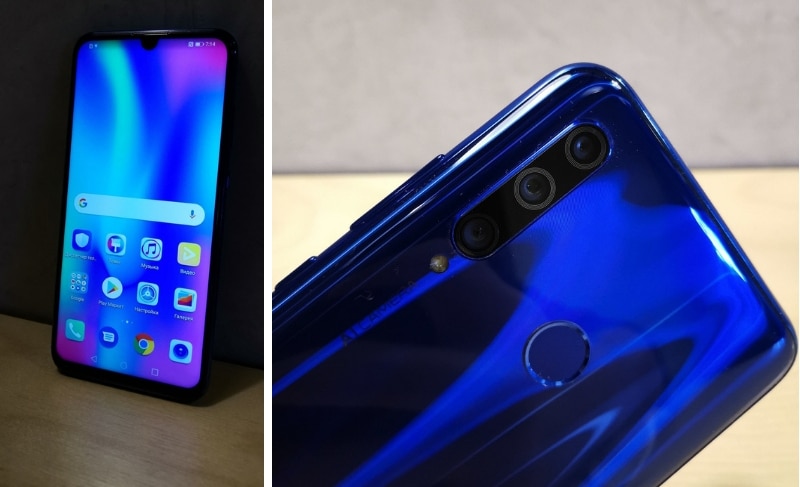 Honor 10i is reportedly coming soon and will be a part of the company’s mid-range portfolio. A Russian publication claims to have exclusive information about the phone and notes that it is an upgraded version of the Honor 10, which was launched last year. There is no word on the pricing or the exact availability details of Honor 10i at this point. Honor, which is a sub-brand of the Chinese tech giant Huawei, is likely to unveil the phone over the coming months. The phone is said to feature a 6.21-inch screen and Kirin 710 SoC.

Hi-Tech.mail.ru has published a set of the photos of the phone that it is calling Honor 10i. These photos show a design that is very similar to the Honor 10 Lite ₹ 17,999, a variant of the Honor 10 ₹ 24,999 that also debuted last year, except the triple camera setup on the back. The glossy design as well as the waterdrop-style notch can be seen in the leaked photos.

The Russian publication writes that the Honor 10i will sport a 6.21-inch screen, most likely with a full-HD+ resolution, and a rear fingerprint sensor. Additionally, the triple rear camera setup of the smartphone will house 24-megapixel, 8-megapixel, and 2-megapixel sensors. The front shooter will be using a 32-megapixel sensor.

Among other specifications, the phone is said to be coming with HiSilicon Kirin 710 SoC with 4GB of RAM, 128GB of onboard storage, and NFC. Other details about the phone are a mystery at this point.

Meanwhile, Honor is also said to be working on another phone, which will be part of the brand’s high-end portfolio. Called Honor 20, the upcoming phone is reportedly going to feature HiSilicon Kirin 980 SoC, a 3,650mAh battery, and a triple rear camera setup.

Realme has announced that the Moonlight Silver colour variant of the Realme 1 smartphone will be arriving in India next week. The Oppo-owned brand had launched the Realme 1, aimed at the Indian youth and meant for e-commerce channels, in May 2018 as its first smartphone. Initially, the handset was available in Diamond Black and Solar Red colour variants and, […]

Japan’s Sharp Corp unveiled its long-awaited move into the organic light-emitting diode (OLED) market on Wednesday as the Apple supplier looks to catch rival Samsung Electronics Co. Sharp will offer OLED panels in its new smartphones later this year and plans to sell the screens to other manufacturers, although it has signalled it is wary about a rapid expansion in […]